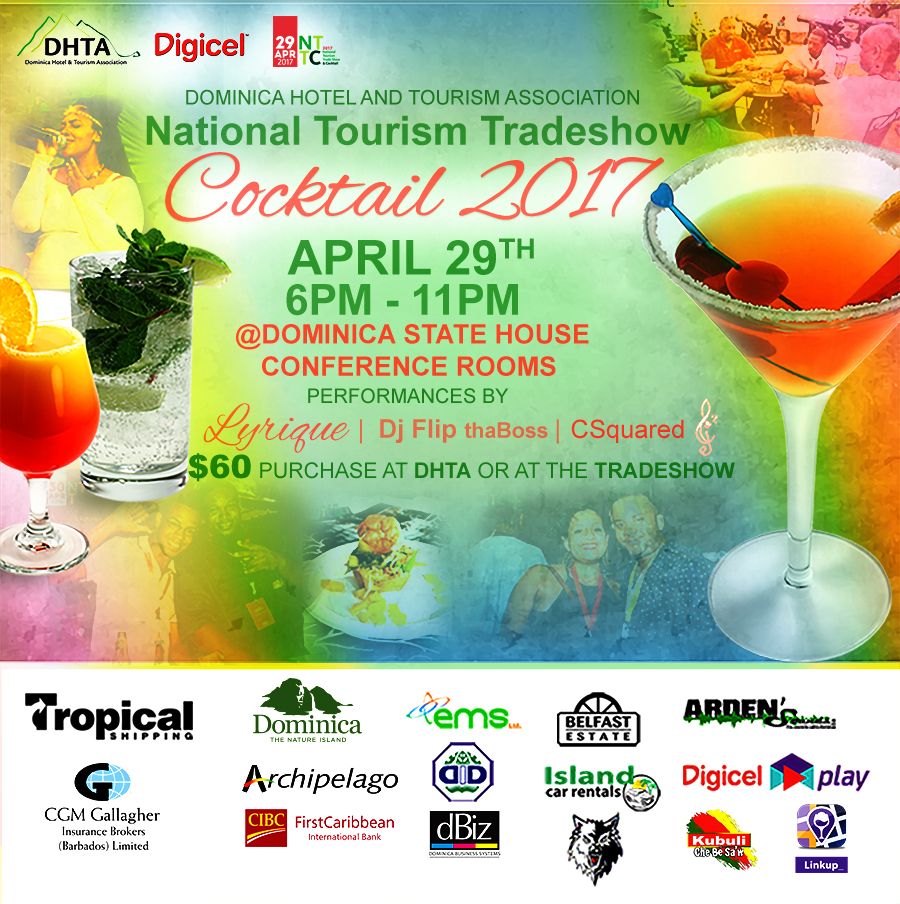 A new venue, a new floor plan, beer garden and pricing are just some of the exciting changes awaiting participants of the National Tourism Tradeshow & Cocktail 2017, the Dominica Hotel and Tourism Association.

Now in its 9th year, the event which features seminar sessions, tradeshow and evening cocktail, will take place April 29th at a prestigious new location, The Dominica State House.

The NTTC, which had previously been held at the Cabrits National Park, is the leading travel tradeshow for Dominica, with participants ranging from major suppliers of local products and services to tour operators serving destination Dominica and more. This year’s theme highlights the power of the individual to shape the industry – “Industry development – Fuelling growth through collective effort”.

“Our goal is to build upon and revitalize a vibrant National Tourism Trade show and Cocktail that would meet the needs and expectations of our members, participants and sponsors” said Kevin A. Francis, new Executive Vice President of the Dominica Hotel and Tourism Association.

“The DHTA has never wavered from its goals and commitment to its members. Like the tourism industry itself, we are constantly shifting and evolving to make sure we put forth a product that effectively responds to the ever-changing tourism market and the way people in the industry are operating and buying today,” Francis explained. “Many of the changes our patrons will see during the event are direct results of feedback given over the years.”

The NTTC is made up of three components; a seminar component, tradeshow show component and the evening cocktail.

The seminars will feature discussions on industry development from some of the top professionals in the Tourism and Hospitality industry.

As part of the transformation into its new design and identity, the tradeshow will open with a new venue layout, fresh atmosphere, and a number of new resources and product category focus areas.

“By redesigning the layout, we are now able to direct the flow of foot traffic and increase visibility for all booths, participants and entertainment” Francis said.

The Cocktail is promised to be the best year yet as the event showcases a range of local entertainment.

The NTTC will also feature an art gallery where local artistes and local producers will display their work, a main stage with live performances during the tradeshow, as well as a vineyard and beer garden.

View the Tradeshow Component live on the Official DHTA Channel on ComeSeeTv here:

NTTC is the leading travel tradeshow for Dominica, seeing participation of major local suppliers of products and services geared towards improving tourism operations and attracting influential OTA brands and tour operators serving destination Dominica. NTTC also seeks to assemble top speakers from a variety of industry segments for a series of peer-to-peer breakout sessions under the theme “Industry Development: Fuelling Growth through collective effort. And the cocktail features live entertainment and food & wine, rum and beer by Dominica's top Chefs and sommeliers.

About the Dominica Hotel & Tourism Association

The Dominica Hotel & Tourism Association (DHTA) is a non-profit organization providing centralized and innovative information, advocacy, and leadership for the tourism industry in Dominica. First established in 1972 and operating as a membership-based tourism development organization for over four decades, the Dominica Hotel & Tourism Association is a focal point for the tourism industry in Dominica. DHTA assumes a leadership role in the industry, and acts as a catalyst for enabling Dominica’s tourism economy to reach its full potential to the benefit of our current and future members, visitors, investors and travel partners, citizens and the Commonwealth of Dominica.